Tools for Formatting Your Citations
When searching library databases for your sources, use the Cite tool and select APA to copy and paste the citation for that source.

NOTE: You must always double-check the formatting that the database provides. It is not always accurate. Look over the format of the authors' names and capitalization in particular.
APA Tutorial and Quiz
​Note: Some information in this tutorial still refers to the 6th edition of the APA Publication Manual. Click on the image to begin the tutorial.
A Note About APA 7th Edition
In late 2019, the American Psychological Association (APA) published the new 7th edition of their publication manual. For specific information, consult Scribbr's list of The most notable changes and/or Charles Darwin University's chart of Key changes between APA 6th and APA 7th. Most of the resources on this guide are updated to reflect the 7th edition.

A word of caution: Citation tools in library databases and other online citation generator tools may not be up to date. Please check which edition these tools are using and talk to your professors about their expectations for your research assignments.
Detailed APA Guides and Instructions
APA Style from Excelsior OWL is licensed under CC BY 4.0 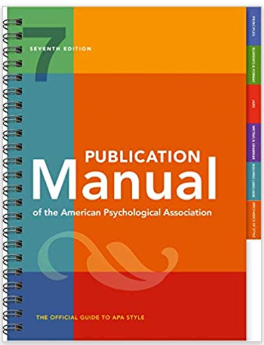 APA Style and Grammar Guidelines
Browse topics from the official APA website, including:

In APA Style, an in-text citation typically includes the author's last name and the date of publication, in parenthesis. If you use a direct quote, include the page number for the reference. For three or more authors, include the first author followed by et al. (Smith et al., 2009, p. 16).

Examples from OWL at Purdue and APA Style Blog:

After the intervention, children increased in the number of books read per week (Smith & Wexwood, 2010).

Smith and Wexwood (2010) reported that after the intervention, children increased in the number of books read per week.

According to Jones (1998), "Students often had difficulty using APA style, especially when it was their first time" (p. 199).

Johnson (1984) argued that "the universe..." (as cited in Smith, 2003, p. 102).
APA References List
For a full list of examples, see APA References: Documenting Sources at the End of Your Paper
(from Excelsior Online Writing Lab)