Search for materials beyond SCSU, from thousands of libraries and institutions around the world. Click on the FindIt! button and sign in to and request items through Interlibrary Loan.

Streaming video on topics in ethics, social and political philosophy, history of philosophy, religion and sprirituality, world religions, and more.

Search over 2,000 scholarly journals covering the history of the world from 1450 to the present (excluding the United States and Canada, which are covered in America: History and Life).

Search 2,000 scholarly journals on the history of the United States and Canada from prehistory to the present (the rest of the world is covered in Historical Abstracts).

A comprehensive database that searches the contents of over 550 philosophical journals as well as books, anthologies, and book reviews related to topics in philosophy.

Catholic Encyclopedia
Designed to present its readers with the full body of Catholic teaching, the Encyclopedia contains not only precise statements of what the Church as defined, but also an impartial record of different views of acknowledged authority on all disputed questions. The online edition is based on the 1917 print edition.

Jewish Encyclopedia
This is the online version of the Jewish Encyclopedia which was originally published between 1901-1906. Because of this works publication date, it does not include events of the 20th century. However, it contains important information that is relevant today.

Encyclopedia Mythica
An encyclopedia of world myth, legend, and folklore containing over 6100 articles on gods and goddesses, heroes and demons, supernatural beings and creatures, and sacred objects. Users can browse topics or search by keywords.

Explores such topics as deities and divinities, the nature of humanity, the end of life, the conquest of fear, and the quest for attainment of harmony with nature and other humans. Include nearly 500 entries that seek to rediscover the original beauty and majesty of African religion.

Provides a comprehensive overview of the globalization of religious culture and society around the world in both its historical and contemporary aspects. The encyclopedia includes topics related to the diaspora of cultures and dispersions of peoples; the transitional aspects of religious ideas and practices; the cultural diversity of religious traditions; and the responses of religion—both negative and positive—to multicultural society.

Encyclopedia of Islam and the Muslim World

This encyclopedia looks at Islam's role in the modern world in the context of the religion's history and development over the last 13 centuries. Contains thematic articles, biographies of key figures, definitions, illustrations, maps and more.

Religion Resources in the Library 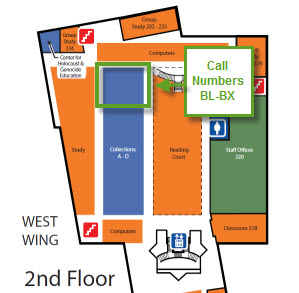