Ask A Librarian Library Card
Fake news vs. legitimate sources
The Problem With Fake News (and how our students can solve it)

Breaking News Consumer Handbook: Fake News Edition (WNYC/WNYC)
Search tips for library databases
Finding legitimate sources
Select at least two different databases to search for resources on your topic. Use the limits within the databases to sort your results by article type or year of publication.

Peer-reviewed journal articles (use the limit function of the database):
Academic Search Premier (all topics)

Articles from over 200 newspapers, magazines and journals of the ethnic, minority and native press. Provides in-depth coverage of a wide range of current and historical topics. Limit the Source Type to "Scholarly Journals" for peer-reviewed articles.

In-text examples from OWL at Purdue and APA Style Blog:

After the intervention, children increased in the number of books read per week (Smith & Wexwood, 2010).

Smith and Wexwood (2010) reported that after the intervention, children increased in the number of books read per week.

According to Jones (1998), "Students often had difficulty using APA style, especially when it was their first time" (p. 199).

Johnson (1998) argued that...(as cited in Smith, 2003).
Library services
Library Access from Off Campus
View instructions and get help with troubleshooting.

Student Study Rooms
Reserve student study rooms for group work, available on the second and third floors of the Library.

Equipment Check Out
VIsit the Circulation Desk to borrow digital cameras, camcorders, projectors, and other equipment.

Botelho, S. (2014). Hungry, but hurried. University Business, 17(7), 37–40.
Locating full text articles
When searching library databases, you will sometimes see a direct link to the PDF version of the article. If you don't see this link, look for the Find It! button.

This button will take you to a screen that shows you how to get access to the full text of the article you need. You will see one or more options: Example: 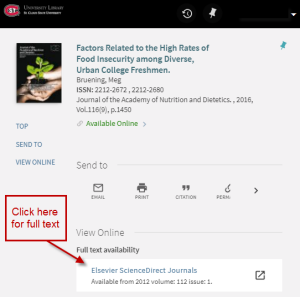 If you see a link to Request through Interlibrary Loan, click it and then click Send Request. You will need to be logged in with your StarID and password. You will receive an email with a link to the full text of the article, usually within two days.
Subject Specialist